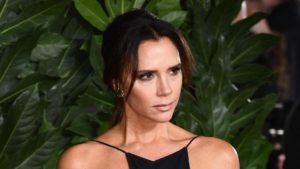 She is also an English businesswoman, Fashion designer and model. She is also known as Posh Spice. Her height is 5.4’’ (1.63 m). She got married to David Beckham on July 4, 1999 and now she has four children.

Victoria Beckham music Career: Beckham Professional career start in the year of 1994. In the late 1990, Beckham from the all female singer of the world Beckham rose brightly on the sector of pop song.

In 1996 she was dubbed as Posh Spice in issue of the British pop music magazine. She is also selected for the magazine as Top of the Pops. Then she built up her solo pop music career.

She is selected number four of the top ten UK pop singers. In November 2, her first album released which name was Out of Your Mind. During her solo career, she has been signed to Virgin Records and Telstar Records.

She has her own fashion denim brand, DVB Style. But first she includes the designs a line of Jeans for Rock and Republic.

Her brand also produced sunglasses, fragrance which is titled as intimately Beckham. She also produced fashionable handbags and jewellery. She has released two books which counted as best-selling book. The one book is her autobiography and another one is about fashion.

Victoria Beckham Personal Information: Beckham sometimes changed her hair styles and hair color. She frequently wears high heels. Her smiling face look rarely and she always holds a handbag whatever she laughs about.